A fixed gas detector is permanently installed to continuously monitor plant and equipment emissions and ensure personnel safety and assets protection. Preemptively warning of flammable, toxic gas and vapour release or Oxygen depletion. Detectors can be installed indoors or outside. Some monitors use ultrasonic acoustic microphones as opposed to sensors for leakage detection.

The first part of the system is the sensor that picks up the target gas, in a Petrochemical environment, this usually is a combustible gas. Hazardous areas require intrinsically safe equipment and approvals ATEX (Europe) or UL (USA) are mandatory. Zone 0 and Zero 1 are defined as areas where an explosive atmosphere is likely. Zone 2 is defined as an area where an explosive atmosphere is less likely but may occur because of a mishap or abnormal event. 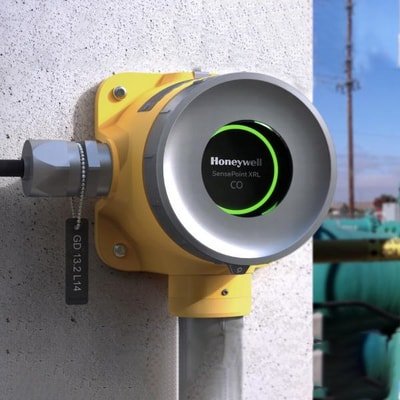 Combustible gas is measured in LEL (Lower Explosive Limit). Gas sensors deployed can be one or a mix of the following; Catalytic, Infrared Point and for larger areas, Open Path detectors where the gas is detected by absorption into an infrared beam. Infrared sensors have a longer lifetime and are immune from poisoning.

Fixed gas detection is also installed in none explosive environments or safe areas, generally, in these scenarios, the sensors are toxic measuring in PPM (Parts Per Million) or targeting volatile organic compounds (VOCs).

Once gas is detected readings can be viewed locally at the detection point if a display is incorporated and if relays are included, operation as a “standalone control system” is possible, should an alarm event occur, preventive equipment can be activated.

Typically gas concentrations and detector status such as faults are transmitted to a control room, commonly by a 4-20mA analogue signal, or by other protocols such as HART, Modbus or by mV for some combustible Catalytic sensors. A gas control system in a control or command room will only have a few channels for a small protection area or many for a large site. The system will have the capability to transmit signals to other equipment, usually, a building management system that will shut equipment down and engage alarms in an emergency.